When a visit to the museum brings it home 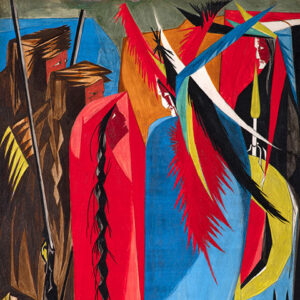 I recently had the opportunity to view a terrific art exhibition at the Peabody Essex Museum: Jacob Lawrence: The American Struggle.  Jacob Lawrence was a great 20th c.  American painter, a social realist, and one of the few widely recognized African American artists of his era.   Throughout his career, he captured the African American experience in several series devoted to historical figures and events including Toussaint L’Ouverture, Frederick Douglass, Harriet Tubman, the migration of over a million African Americans from the South to industrial cities in the North, life in Harlem, and the civil rights movement.  I love Lawrence’s work, and in this particular exhibition, he not only documented pivotal moments during the Revolutionary War and War of 1812 but captured the tragic irony in the colonists’ fight for freedom, often side-by-side with enslaved and indigenous people.

What was also of great interest to me was the museum’s honest assessment with their own relationship with race, our shared humanity, and how it shapes the curation and narrative of both their permanent collections and exhibitions.  There was a poster at the end of the exhibit that included a broader array of museum staff than is typical in such recognitions – an effort at inclusivity.  But you know what comes next:  the stark realization that the exhibit staff was overwhelmingly white.  The museum’s blog contains a thoughtful reflection by staff member Leveille McCain on this irony:

[Museums’]institutional histories, their collections and their funding are often deeply rooted in colonialism and they have traditionally promoted a Euro-centric worldview. What you may be less aware of is that the wave of decolonization that began last century has begun crashing on the shores of the museum world. In addition to the long-standing call to go beyond dominant narratives and reflect our varied humanity, museums are now increasingly held accountable for their internal practices and the role they play in a volatile world…

When your organization is built on the premise that you provide space with the power to be variously entertaining and informative, to build community, to maybe even be transcendent for anyone who walks through the door, then questions of diversity, equity, inclusion and accessibility (DEAI) cut right to the core of your mission.

McCain notes the pride the museum staff rightfully took in telling the story of Lawrence and the deeply rooted history of African-American and indigenous people in the American story.  He also points out that the staff partnered with a more diverse set of collaborators in assembling the exhibit.  He concludes:

Being held accountable is often unpleasant but necessary, and this case is no exception. At PEM we are still early in the process of re-examining ourselves through the lens of DEAI as part of a wholesale strategic planning process… As the strategic planning process moves forward, we will work to keep the lessons of this exhibition front-of-mind as we set out to define a more diverse and inclusive practice.

Jacob Lawrence, Behind the Curtain, by Leveille McCain