“It’s not enough until we are all safe, until everything changes.” 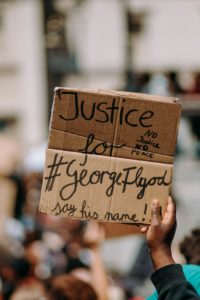 Watching the news this week, I was taken by the statement of a young woman named Zoe Schaeffer, who had traveled to Minneapolis to pay her respects at George Floyd’s memorial site. When asked by a reporter her reaction that all four officers involved with Floyd’s death had been arrested and charged, she responded, “I won’t be satisfied until I can wake up and have kids, and have them not fear for their lives for just being black, for being darker than other people…It’s not enough until we are all safe, until everything changes.”

It’s not enough until we are all safe, until everything changes. That statement says it all. But how do we begin to fulfill such a daunting challenge that is an entirely reasonable desire? I stand as an ally, applaud the unpredicted outpouring of solidarity with Black Lives Matter, the public statements of mourning, demands for police reform, renewed discussions of diversity, and inclusion in workplaces, all critically important.

I believe that achieving political power is the essential task for this moment. I draw my inspiration from Atlanta Mayor Keisha Lance Bottoms:

During the Civil Rights Movement we saw people of all races and all walks of life coming together to say: This is not right, and we are going to stand up for the goodness of America. That same spirit must rise and prevail today. Such a pursuit is not partisan. It’s American. I cannot guarantee that I will pass freedom down to my children, but I can and will continue to fight for it and teach them how to fight for it every single day. One of the best ways that we can fight for it is by fighting to ensure that our governing bodies are led by people who value the freedom, equality and humanity of all of mankind. Now, more than ever, elections matter; leadership matters. That’s why November 2020 matters.

… I would like to offer one salient solution to the atrocities we are faced with today. Let us each commit to exercise our right to vote this November. Let us vote against state-sanctioned violence, vitriolic discourse and the violation of human rights…

Think of what could be possible if each of us allied in favor of justice spent more than nine minutes getting people registered in preparation to make change at the federal, state and local levels this fall. That would be the most effective response, the deepest payback, for each minute that passed when that Minneapolis policeman pressed into Mr. Floyd’s innocent body.

… Join me in getting ready for the polls. Together our generation of Americans can declare — without equivocation — that freedom will not face extinction and that progress will not be paralyzed

There are plenty of objections to this clear call to voting as a means of promoting justice and controlling our future:

These points of view are rooted in true and accurate observations, but in the end are not good arguments against voting as a means of achieving freedom and justice in a democratic society, even one with as many flaws and contradictions as our own.  Despite the stain of racism and white supremacy on our history and our present, there is no doubt that slow but significant progress has been made.  Progress through the formal systems of voting and representation in dialogue with social and civic organizing in our communities.  Even voting for flawed candidates is a means of creating and exercising power in the pursuit of justice.

There is nothing that says progress toward freedom is inevitable.  In this current moment, the stakes are very high.   Voting in November is essential.  The party and politicians that control most of the levers of power in Washington are clearly an offense to our democratic values and humanity.  A victory in November for the party in power could be an inflection point in our history, allowing them to deepen their drive to reverse the limited progress we have made.

If we unite across the many strands of America and vote in November, we will have the power to turn the country toward a brighter future of freedom and justice that we are marching for now. We must continue to march and vote until we are all safe.  Until everything changes.